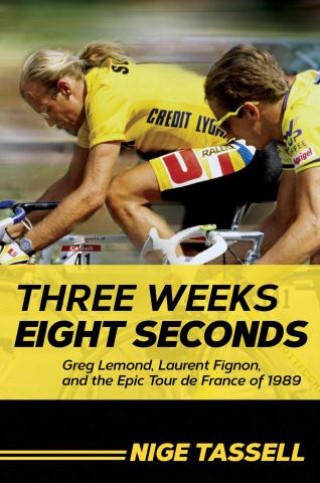 “I was convinced deep inside that I could not lose. I could not see how it could happen.” —Laurent Fignon “I didn't think. I just rode.” —Greg LeMondFor a race as long as the mighty Tour (three weeks of testing the limits of human endurance), to have the ultimate victory decided by a margin of just eight seconds almost boggles the mind. But that’s exactly what happened between American legend Greg LeMond and Laurent Fignon. And LeMond did it on the final stage, as the two sprinted through down the Champs Elysees. It remains the smallest margin of victory in the Tour's 100+ year history. But as dramatic as that Sunday afternoon was, the race wasn't just about that one time-trial. The leader's yellow jersey had swapped back and forth between LeMond and Fignon in a titanic struggle for supremacy, a battle with more twists and turns than an Alpine mountain pass. At no point during the entire three weeks were the pair separated by more than 53 seconds, a razor thin margin between ultimate triumph or agonizing torment. And all this despite LeMond's body still carrying more than 30 shotgun pellets after a shooting accident. Three Weeks, Eight Seconds brings one of cycling's most astonishing stories to life, examining that extraordinary race in all its multifaceted glory.

Nige Tassell: Journalist Nige Tassell has written extensively about sports for a range of titles, including FourFourTwo, The Guardian, 220 Triathlon, The Word and BBC History. He was the editor and writer of World in Motion and is the author of The Bottom Corner.